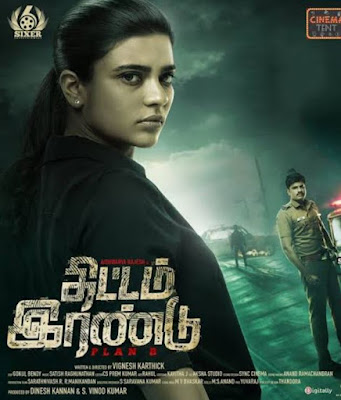 Thittam Irandu is a south Indian Tamil police procedural mixed with a nice love story that turns sour as the female detective investigates in a murder case and consecutively digs into the life of her new boyfriend.

It is a very dark and atmospheric police procedural, with a hefty overstuffed script - but also with too many fade outs and accumulated scenes that make it almost impossible to find an organic flow in the long  run.

It's getting quite annoying as it loses its 'natural rhythm' further down the road, if there's anything like that in filmmaking. Thittam Irandu could have been a lot better aswell with a little more effort especially in the sound department for there are endless repetitions of filler music. Wouldn't have been bad if it took care of the endless plot meanderings at the end aswell. But, there's good acting throughout, so I won't complain too much.

Thittam Irandu is enjoyable for most of the running time, even though it starts to drag considerably after the intermission, or rather endlessly towards the finale. But: only to take another major turn to present its main social relevant twist, which falls from the sky. I'm pretty exhausted now.

Something is not right, madam!

Indeed, something is not right. Less would have been more. So much more.