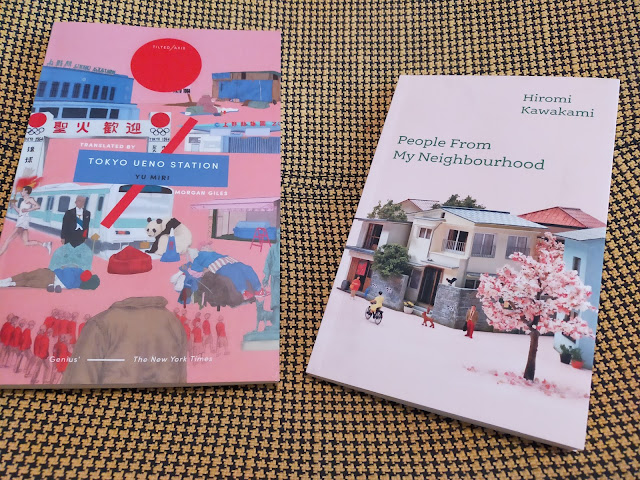 TOKYO UENO STATION is not a straight narrative, but rather a quite experimental novel. As "the plot" unravels in flashbacks - by an obscure, already seemingly dead medium floating around Ueno park, the story of a life of hardship is slowly being revealed. Of heavy labor, broken families, financial troubles and finally: homelessness. This is not the exotistic Japan you will find on a successful youtuber's channel.
The events get illustrated by those of "greater dimensions", like the historical events around Ueno park hill during the Tokugawa period, the Great Kanto earthquake, the fire bombings at the end of WW II or the life of the Emperor.
Quite often, Yû Miri uses methods of association, of glueing scraps and bits of pieces together in order to abstractly poetize the narrative flow. There are passages where ideas or narrative structures dominate the text, which only slowly floats back to its central plot.
TOKYO UENO STATION is rather complex and surely is no easy but  rewarding read - you have to take your time, read passages again and again to fully grasp the complexity of its contents. Sometimes, you have to work your way through it. A very interesting read - but did I like it? I'm not so sure - but it definitely gives you alot to think about.
***
On a more private scale with a narrower focus, as the title already suggests, PEOPLE FROM MY NEIGHBOURHOOD by Hiromi Kawakami is a collection of losely connected micro-short-stories about the people of a fictitious neighbourhood.
The stories seldomly extend to more than three or four pages and tend to get weirder and more obscure the deeper you get into the book - something that I cherished at first: as a creative, funny and enjoyable literary experience - but towards the end, it seemed more and more arbitrary.
Kawakami's writing style is very fluent and precise, like in any of her other novels - and she has the rare capability of describing a scene in just a few sentences that manage to evoke a whole world.
The reader instantly feels right in the center of the text, as if he already read two hundred pages into that plotline. But no, it's only half a page. This might sound hard to believe, but Kawakami is such a routined writer who masters this challenge easily. From the first micro-story to the last. It's fascinating. This book might have worked even better for me if it had stayed a little more on the tracks of "real life". Still, it is a beautiful read.
***
Michael Schleeh
*
Yu Miri's Tokyo Ueno Station is being published by Tilted Axis Press in 2019, translated by Morgan Giles, 168 pages.
Hiromi Kawakami's People from My Neighbourhood is published by Granta in the UK, 2020, translated by Ted Goossen, 121 pages.
*