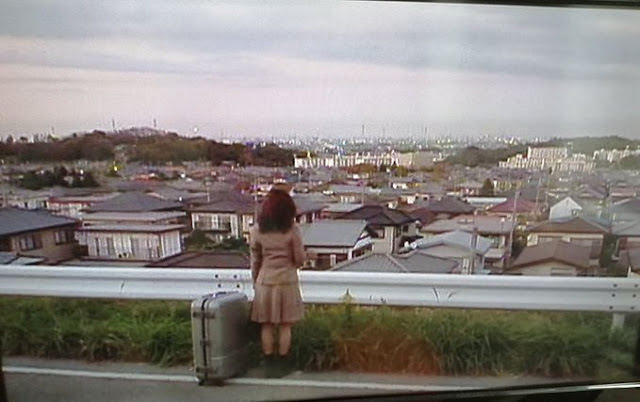 You never think of anyone but yourself!

Although quite far from Aoyama's meditations on guns & violence in his earlier work, SHADY GROVE as a romantic drama still feels weird and alien from minute one. It's one of those awkward films in colour and tone which make you really uncomfortable and clearly state that human interaction is deficient, because people from "the big city" are made from cement. Especially when they are company people working for big firms. They do have a life and loved ones at home, but that's just meaningless words in an environment of cold-hearted company politics and career decisions.

But Aoyama's film is not really focussing on the salaryman's side, but has its female protagonist in the center of attention. It's an anti-romantic drama filled with troubles, silence, and angst. Which makes it even more devastating.

Basically SHADY GROVE is about two love-stories that never come to realization because of the poor decisions people make. But still, Shinji Aoyama presents it in a way as if those are not at all their own decisions - more like they are forced by an outside force to behave that way. The protagonists are completely locked up in themselves and when they try to be more open, they get rejected, because they don't behave as it's supposed to be.

A film about a Japan in which people are living remote-controlled, a relentless society that doesn't care about the needs of the individual. Filmed in dark, desaturated colours, DTV-style, often even very bleak TV-styled-visuals, this is an anti-arthouse-film (DoP is Masaki Tamura, who also shot EUREKA in the following year). Though, the narration gets corrupted by visionary digressions into imagined territories that feel like mythical fairy tales. A completely weird film about estrangement - and yet there's still a grain of hope, as the alienated anti-heroes get together for a brief moment. The last vestiges of a romantic concept which was given up generations ago.

It's hard to imagine, how this anti-romantic drama might have fitted into a commercial environment. It is the third film Shinji Aoyama made in that same year, and he also co-wrote the script after a short story by Natsume Sôseki called The Poppy (Gubijinsô, from 1907). A year later, he will be directing his most lauded film, EUREKA. Like early Kurosawa is weird and alienated, this is: dystopian Aoyama.

März 20, 2013
Here are some pictures I took during a private screening of Susumu Hani's extremely rare and seldom seen feature film  AIDO - SLAVE OF LOVE , which is the movie Hani made after the famous NANAMI: INFERNO OF FIRST LOVE. The film is beautifully shot, completely absorbing and structurally abandoning all narrative consensus - it is somehow - for most of the time - a subjective trip into the mind of the protagonist Shusei (Kenzo Kawarasaki). As you can asume, a dreamlike state predominates the film; and with its' devotion to extensively focussing on the details of the body while making love, presented in detailed close-ups, aswell as its' beautifully daring setpieces, it reminded me to some extent of Toshio Matsumoto's experimental oeuvre, as for example in his short film PHANTOM . AIDO was submitted to the competition-section of the 19th Berlin International Film Festival (aka Berlinale) - a fact that is quite astonishing, if you consider the direction the main section of
Mehr anzeigen
Follow @schneelandblog