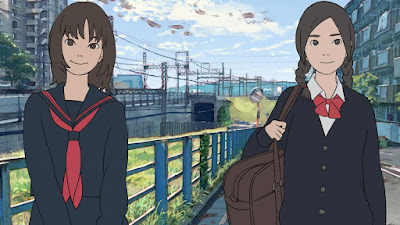 My first film at this year's Film Festival in Hong Kong was very enjoyable. Although the rotoscoped animation style is realized in a watercoloured way focusing on simplicity, there is an enthralling beauty to that world with an astounding range of details when it comes to diverse facial expressions of the characters, for example. So, reduction is the first word that pops to mind seeing THE MURDER CASE OF HANA & ALICE. And it's a very simple story as well. Though I read somewhere that the film was boring plotwise, I cannot agree to that. It's very focused with a straight narrative. Not one of those films that mix together every genre just to please any kind of audience anywhere in the world. So, it's a playful prequel, sometimes almost otherworldly, to Iwai's own HANA & ALICE film from 2004, 11 years ago: now the original stars playing their own roles as younger versions of themelves.

Basically, 14-year-old Tetsuko "Alice" Arisugawa (Yu Aoi) is a transfer student moving to the town of Fujiko with her recently divorced mother, who discovers a bizarre murder mystery at school involving a missing schoolboy called Judas and the four girlfriends he simultaneously married. And a reclusive neighbour, who spys on her, might be the key to the investigation of the missing person. Or is it the charming boy at school, interestingly named "Yuda" that's got something to do with it? She finally meets the eccentric Hana (Anne Suzuki), almost a hikikomori, who starts helping with the investigation. Yu Aoi is the killer here, again, after I had seen her in PATISSERIE COIN DE RUE (Review) two weeks ago, and here she does it again: barking very rude at people, doing weird stuff, behaving awkwardly. Executing funny movements, as if her body didn't belong to her. One of the best scenes involve the investigation of an old, retired man, obviously a mixing up of two different people, which leads her on a pursuit that has quite some interesting turn of events, but finally leads nowhere. But there is some stuff to be learned, on the way, and how she copes with things is what it's all about. The two characters act very well together and it's very touching that there seems to be the prospect of a deep friendship of two outsiders that just got to know each other.

Another thing I really enjoy experiencing here in HK again, is the audience. The people express their feelings so openly, they laugh out loud, hysterically almost; they applaude and completely seem to open up to what they're watching. This made me enjoy this film even more - even though I had been very tired coming off the airplane without almost hardly any sleep at all during the nightflight. To sum it up, THE MURDER CASE OF HANA & ALICE is an odd story of a blossoming friendship, quite weird sometimes (yes, even some ghosts do appear!), but beautifully done, incredibly touching and therefore strongly recommended.